The Shutdown process in a Linux system is an intelligent chain process where in the system ensures the dependent process have successfully terminated.

Difference between the Halt and Poweroff in Linux?
What is a Cold Shutdown and Warm Shutdown?
Linux System System Halt : The Halt process instructs the hardware to Stop the functioning of the CPU. Can be referred as a Warm Shutdown.
Linux System Poweroff/Shutdown : The Poweroff function sends the ACPI(Advanced Configuration and Power Interface) to power down the system. Can be referred as a Cold Shutdown.

As you may be aware the Linux runtime environment is a duo combination of processes running in User space and the Kernel space, All the major system activities and resources are initiated and governed and terminated by Kernel space.
So we got the Kernel space and the User space, The kernel space is where all the reseurce related processes run, which follows a finite behaviour, and the the userspace where the processes are dependent on the user actions, most of the userspace programs depend on the kernel space and make a context switch to get the CPU scheduling and such..
So, In the sequence of Shutdown on a linux machine, the userspace processes are first terminated in a systematic fashion through the scripts triggered by the core systemd processes which ensures clean exit and termination all the processes.

The Linux system provides us quite a few commands to enforce fast shutdown or a graceful shutdown of the operating system, each having their own consequences.

The init is a powerful command which executes the runlevel it is told to.
Here the init 0 proceeds to Power-off the machine

Here the init 6 proceeds to Reboot the machine

These commands are real quick as it triggers the kernel space shutdown invocation process.. most often resulting in unclean termination of processes resulting system recovery and journaling while booting.

The following commands Shutdown the machine in seconds after issuing the command But tend to follow the kill sequence and clean exit of the processed.

Prints a wall message to all users.
All the processes are killed and the volumes are unmounted or converted to be in Read-Only mode while system power off is in progress.
Puts the system into a complete poweroff mode cutting out power supply to the machine completely.

The servers can only be brought back online through physical poweron or Remote Power manager console such as IPMI or ILOM.

To reboot or [/code]systemctl kexec[/code] will to restart the operating system which is one power cycle or equivalent of shutdown followed by the startup.

It is important to understand that the commands are all softlinks to systemctl shutdown command. and ensure in proper shutdown sequence process

It is important to observe that all the commands are softlink to the systemctl process, When issuing a shutdown or reboot

The best practice to poweroff the system by enabling broadcast the notification message to all the users connected actively either through the Pseudo remote connection terminal or TTY terminals, Demonstrated as follows:

# this writes an entry into the journal, the wtmp and broadcasts the shutdown message to all the users connected through PTS and TTY terminals

What is the difference between systemctl poweroff and systemctl halt ?

The Linux System when put to a Halt state, stops the all the applications and ensures they’re safely exited, filesystems and volumes are unmounted and it is taken into a halted state where in the power connection is still active. And Can only be brought  online with a power reset effectively with a simple reset.
The Halt process instructs the hardware to Stop the functioning of the CPU.
Commonly can be referred as a Warm Shutdown.

Below is the screenshot to demonstrate the same 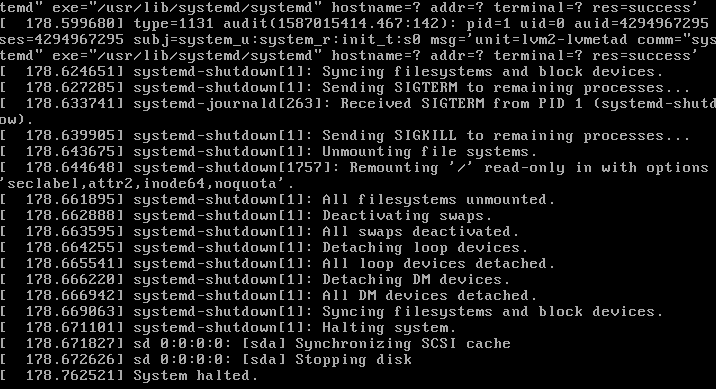 The Poweroff function sends the ACPI(Advanced Configuration and Power Interface) to power down the system.
The Linux System when put to a Poweroff state it becomes completely offline following the systematical clean termination of processes.. and power input is cut off to the external peripherals, which is also sometimes called as cold shutdown, and the startup cold start.
Commonly can be referred to as a Cold Shutdown.

If you found the article worth your time, Please share your inputs in the comments section and share your experiences with shutdown and reboot issues

Can I reboot Linux remotely?

How to shutdown the remote Linux server. You must pass the -t option to the ssh command to force pseudo-terminal allocation. The shutdown accepts -h option i.e. Linux is powered/halted at the specified time.

Can you reboot a server remotely?

Open command prompt, and type “shutdown /m \\RemoteServerName /r /c “Comments”“. … Another command to restart or shutdown the Server remotely is Shutdown /i. Type Shutdown /i on the command prompt and it will open another dialogue box.

What is the Linux command to reboot?

How do I reboot from remote desktop?

What does sudo reboot do?

sudo is short for “Super-user Do”. It has no effect on the command itself (this being reboot ), it merely causes it to run as the super-user rather than as you. It is used to do things that you might not otherwise have permission to do, but doesn’t change what gets done.

How do I remotely turn on a Linux server?

Enter the BIOS of your server machine and enable the wake on lan/wake on network feature. …
Boot your Ubuntu and run “sudo ethtool -s eth0 wol g” assuming eth0 is your network card. …
run also “sudo ifconfig” and annotate the MAC address of the network card as it is required later to wake the PC.

How do I restart a terminal server remotely?

How do I send Ctrl Alt Del to remote desktop?

Press the “CTRL,” “ALT” and “END” keys at the same time while you are viewing the Remote Desktop window. This command executes the traditional CTRL+ALT+DEL command on the remote computer instead of on your local computer.

How do I remotely restart a server by IP address?

How do I reboot from command prompt?

How does Linux reboot work?

The reboot command is used to restart a computer without turning the power off and then back on. If reboot is used when the system is not in runlevel 0 or 6 (i.e., the system is operating normally), then it invokes the shutdown command with its -r (i.e., reboot) option.